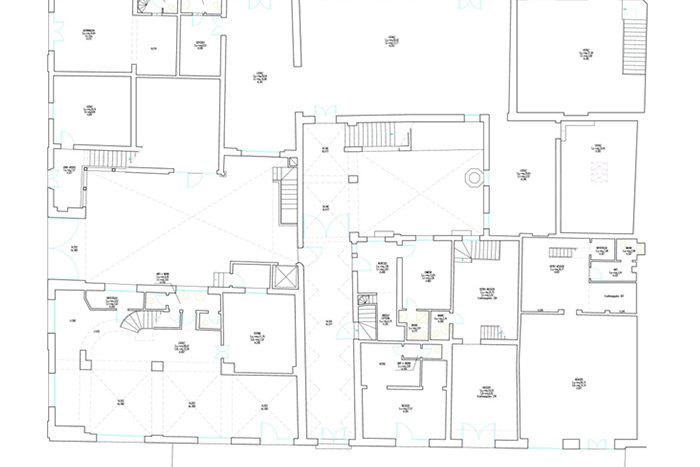 The site, whose oldest nucleus was built in 1200, is divided in three different, but linked, buildings, with a total of 22 units for residential and commercial use. The historic building (Block 1) is on Via Val D’Aposa (corner of Via De’ Griffoni) and it has two floors above ground and an habitable attic. The ground floor rises on an elegant portico with 7 arches, supported by brick-plastered columns with Doric rock capitals. The second building (Block 2), built along Via De’ Griffoni, doesn’t have porticos, it has a brick front and two floors above ground, with an turret in the final portion. The third building (Block 3), which completes the front of the site, parallel to the main building on Via Val D’Aposa, was built in the post-war reconstruction and has four floors above ground, with balconies on various floors. The basement is used as cellars belonging to the residential units above, accessible by a staircase from the communal hallway. The main entrance to the building is on Via Val D’Aposa, where there are the stairwells to the different blocks. The building, property of the University of Bologna “Alma Mater Studiorum”, is almost all available, a part from five residential units, still leased, four as employment compensation.